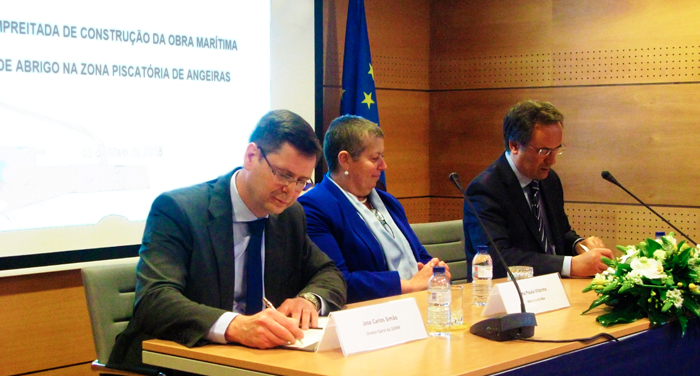 On May 2nd, Teixeira Duarte – Engenharia e Construções S.A. (TD-EC), through its Geotechnics and Rehabilitation department, a contract for the “Construction of the Maritime Shelter Works in the Angeiras Fishing Zone in Matosinhos” was signed with the Directorate General of Natural Resources, Safety and Maritime Resources (DGMR).

The value of the contract is approximately 3.1 million Euros, and has an expected execution time of 18 months, which includes a 6-month winter stoppage and is expected to start in the third quarter of this year.

The work consists of the construction of a breakwater with an approximate length of 450 metres, which will be based on rock outcrops, with a classic structure made up of ToT rock-fill prisms (all along its length) covered by sub-mantles and mantles also in selected rock-fills and protected by 100kN Antifer-blocks on the top. The crown will consist of a simple concrete structure and a light will be installed on the top.

Geotechnics and Rehabilitation is the activity department of TD-EC, which encompasses Geotechnics and Foundations and Rehabilitation, as well as Project Management which, aside from integrating a benchmark engineering and research nucleus in the company and in the market, it also coordinates the Maritime Works, which is capable of performing various types of work, such as commercial, fishing and recreational ports, construction and rehabilitation of coastal protections such as jetties, groins, artificial beaches and adherent defence works, hydraulic landfills, emissaries and dredging operations. This Exploration Centre also coordinates the implementation of the BIM (Building Information Modelling) system within the entire Teixeira Duarte Group.

The operation of the Teixeira Duarte in this sector is characterised by interventions in projects of elevated technical complexity and size, both in public and private enterprises, having highly specialised and technically prepared human resources, supported by their own state-of-the-art technology. The activity developed in the TD-EC Geotechnics and Rehabilitation department registered a significant increase in total revenues in 2017, reaching a value of approximately 78.8 million Euros, which corresponds to an increase of 57.4% for the financial year 2016.

Please enable Strictly Necessary Cookies first so that we can save your preferences!